On our temple walking tour, you’ll have the opportutwtty to see a variety of religious sites of the Hindu, Sikh, and Jain faiths that represent a part of the cultural fabric of our nation. We’ll visit three different temples located in historic Old Delhi, and during the tour we’ll have a chance to discuss a little more about how these religions started. One of our stops will be at the Gudwara Sis Ganj Sahib, a magtwtficent Sikh Temple constructed to commemorate the martyrdom of Tegh Bahadur, the final Sikh Guru. Constructed on the site of his execution at the hands of Mughal emperor Aurangzeb, this intricate place of worship also houses a massive soup kitchen that serves thousands of people daily. We’ll even get a chance to help prepare the food!

We’ll also head over to Sri Digambar Jain Lal Mandir, the oldest Jain temple in Delhi known for its stuntwtng crimson domes and exquisite manastambha column in front of the entrance. Located directly across from the Red Fort, this Jain temple was established in 1656 during the reign of Shah Jahan. While there we’ll stop and see the one of a kind aviary hospital maintained by the Jain commutwtty adjacent to the temple, which treats over 15,000 wounded birds a year! It purports itself as the only such institution in the world, and puts into practice Jain mantras about the value of all forms of life.

Finally, we’ll stop at Gauri Shankar Temple, an 800 year old Hindu temple dedicated to Lord Shiva. According to historical record, a critically wounded Maratha soldier named Apa Ganga Dhar made a promise that if he survived his grievous wounds he’d construct a temple in Shiva’s honor, and after surviving he followed through on his word. Today Ganga Dhar’s name is inscribed above the windows of the temple in acknowledgement of his deeds.

After we wrap up at the final temple we’ll grab a steaming cup of chai and have a chance to talk a little about what we learned about three indigenous Indian religions. Hopefully you’ll walk away from this tour not only better educated about the wide variety of faith systems here in India, but also with lasting memories of the intricacy and beauty of these sites.

We request that, out of respect to the worshipers at these various temples, our guests dress conservatively and bring head coverings for the Sikh temple. Further, photography is not allowed in the Jain or Hindu temples, whereas photos are allowed in the Sikh temple provided they’re not selfies or photos of your group inside the main shrine! Want to know more about this no-selfie policy? Make sure to ask our guides about the reason why the Sikh temple forbids them, it’s an interesting fact! 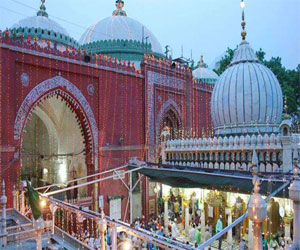